Sale on canvas prints! Use code ABCXYZ at checkout for a special discount!

More on Rule of Thirds 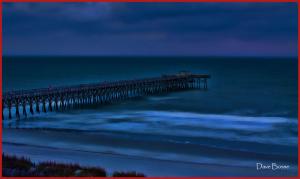 The Rule of Thirds is a guide for composing a photo to make it more interesting composition wise. If you imagine a tic-tac-toe pattern placed over your image, the RoT states that there should be “an important compositional element” at the points where the lines intersect and/or along the lines. Though this rule can be very useful, it is not set in stone. There are times to obey and disobey.

HORIZONS
It is rare that you will find a photo where the horizon is in the very center of the image. Photos with horizons tend to look much more appealing if the sky is taking up either one-third or two-thirds of the image, which would put it on one of the lines of the RoT. This goes for both landscape and portrait shots.

PEOPLE OR THINGS IN MOTION
If your subject is moving to the left or right of the frame, it is always good to give them some lead room in the photo. For instance, if your subject is moving to the right, place the subject along the left vertical line and leave and empty space along the right vertical line. It's hard to explain why, but photos are typically much more eye-pleasing when the subject is walking into the frame rather than out.

BALANCE OF SPACE
Perhaps you have heard of negative space before. It is the space in an image in which there is nothing, and it is often used to balance out the busier parts of an image. For example, if you find a beautiful tree alone in the middle of a field, you might try using the negative space around it to balance out the image instead of placing the tree in the center of the frame. To do this you might place the tree along the left or right side of the frame and leave the other side empty. Or step back and place the tree in the bottom-left or bottom-right corner of the image (where the imaginary lines intersect) and place the horizon along the bottom horizontal line, permitting it's possible with your scene.

SYMMETRY
If you are trying to create a symmetrical image with colors or buildings or patterns, splitting the image right down the center of the photo can create a very engaging effect.

HEAD SHOTS
This actually falls under both categories. If your subject is very close and you're doing a head shot, you'll most likely want the person to be in the center of the frame. Placing the person to one side or the other would seem a bit odd. However, since a person's eyes are the first thing we look at, it works best to put them along the top horizontal line. This almost doesn't need to be said though because if you're filling the frame with your subject's face, this is where they will naturally fall.

Rules are made to be broken... or are they?

I just spent 2 hours viewing and voting on 2500 images in one of the contests. It was unbelievable to me that I could not bring myself to vote for absolutely beautiful photos because of one or two (or both) major photo 101 rules consistently broken or not observed. YES, rules can and should be broken, IF there is an artistic reason to do so but these elementary composition rules should be observed in a majority of the cases. First, don't put the main subject dead center in the composition. Second, observe the horizon line to ensure that is is straight and the composition doesn't look like it's in jeopardy of sliding off the page and never (almost never) cut the composition in half with the horizon line... it makes for a boring composition. These errors were almost entirely to be blamed upon photographers. It must be that most painters and other artists can paint a straight line and have learned the rule of thirds. SO, photographers either buy a level or straighten the horizon line between water and sky or land and sky and don't cut the composition in half with the horizon line. AND, get the bird, dog, tree, flower, girl, or building out of the center and compose it more appropriately "off center". Again a study of the "rule of thirds" and the image provided here will explain my frustration with scenic images which "do not follow the rules".